Should a parent be allowed to give permission for his or her child to play football when that child is unaware of the risk or unable to appreciate the risk?

What about a parent who is unaware of the risk? Is it OK for that parent to give consent resulting in a child playing football?

Does a parent have the right to make a decision that results in his or her child being exposed to a lifelong brain injury?

I ask these questions because earlier today, a new study published in the medical journal JAMA, found that chronic traumatic encephalopathy (CTE) was found in 99% of deceased NFL players’ brains that were donated to scientific research. 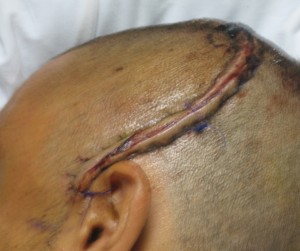 Several years ago, we represented a young man who was allegedly told to play in a high school football game despite his coach knowing that this young man’s helmet was broken. At the time of the game, our client was a team captain and one of the top players. He was being recruited to play at top colleges.

The broken helmet resulted in a serious brain injury and our client was required to undergo two surgeries and incurred substantial medical bills. His football career was over.

We believed the case was a straightforward one. Simply put, our client’s injuries could and should have been avoided had the coach (the adult with authority in the locker room) made sure that our client didn’t play in the game unless his helmet was repaired or replaced. To prepare for the deposition, our consulting experts advised me that at the time of this case, each year there are about 50,000 high school football player concussion-related injuries. Furthermore, independent research has shown that more than 70% of the hits that result in concussions were to the side, face or jaw area.

Practice Pointer: For those of you litigating these claims, companies like Experts.com (full disclosure- I’m a brand ambassador for the company) can put you in touch with the right experts.

Because of our case and recent publicity on this topic (including the above article and movie “Concussion” that stars Will Smith, very real safety and public policy safety concerns need to be discussed.

I played football and understand the attraction of playing and watching the sport. But I didn’t know the risks like I do now and I think in today’s world, it’s important for society to have a public discussion regarding the risks of playing football. This is especially true when playing football involves kids and young adults.

The good news in our case is that after an extensive amount of litigation and just before trial, a confidential settlement was reached. Our client recovered and is doing well in life.

I believe that adults playing professional football in the NFL should be allowed to assume the risk in exchange for being paid to play a sport. Once an adult is provided with all the risks and dangers of playing football, then it is up to the player and his family to play for pay or do something else. The issue is, in my opinion, substantially different when it comes to children and young adults, under 18 years of age, playing football.

I once again ask you to think about what answer you think should be given to the following three questions:

I think these questions are important to ask and discuss. I say this because over the years, I’ve personally observed issues relating to parents pushing young, impressionable kids, onto playing football. The child’s best interest is brushed aside in exchange for a parent wanting to watch his son score touchdowns or worse, the parent reliving his glory days.

This Issue Really Hit Home for Me. Here’s Why:

My son played high school freshman football and had some success on the field. He averaged 13 yards a touch on offense and also had success returning punts and kickoffs (kickoff return #1 and kickoff return #2).

His decision not to play after his freshman year (for many of the reasons shared in this post and also because he wanted to focus on soccer) really tore me up. Watching him do his thing on the field made me very proud. On the inside his decision was tough to swallow. On the outside I supported his decision 100% and we’ve been a soccer family ever since.

Because I enjoyed playing and because of my personal experiences as a dad with a son who not only played, but with a kid who excelled on the field, it’s tough to be objective when answering these questions. When I “manned up” and realized it wasn’t about me and was all about him, the decision he made was easy to for me to support and embrace. Living this experience, I honestly think often times, whether they realize it or not, parents make decisions for their kids that favor the parents’ interests more than the child.

I’m a big fan of my son’s high school football program and love the kids, families, and coaches. Even after my son decided to focus on soccer, I served out the year at VP of the 12th Man Club to help build the program. This post isn’t about bashing a sport, it’s about helping raising awareness so that players and families can make informed decisions that are best for them and their long-term plans.