This is not a Halloween costume. It’s our seriously injured client.

You see, each year we are asked to handle several assault and battery cases. As an example and with our client’s permission, this is a picture of our client (a victim of a vicious assault and battery) after being unexpectedly struck on the side of his head with a broken beer bottle.

Our client’s lacerations required dozens of stitches and resulted in life-long scarring. He was fortunate to have health insurance as his total billings for surgery and scar revision were substantial. 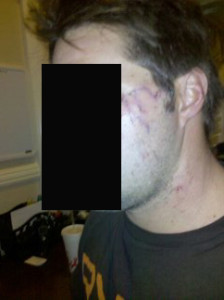 The perpetrator ended up pleading guilty to a felony and spent time in jail. We continued to push our client’s civil case through the court system and this week were able to obtain a civil judgment for our client in the amount of $500,000.00 plus costs and interest.

Many people who call our office don’t really know what is an assault and battery? They do not understand the difference between a criminal case and a civil case?

Hopefully the following will help answer your questions…

The California Penal Code (criminal law) provides for either misdemeanor or felony charges depending on the facts and severity of an assault and battery.

This is a misdemeanor and the least serious charge.

The definition of simple assault is an “unlawful attempt, coupled with a present ability, to commit a violent injury on the person of another“.

Physical contact is not required to be found guilty of an assault.

The penalties for a misdemeanor conviction of simple assault could result in a fine of up to $1,000 6 months in jail. California Penal Code Section 240-241

This can be charged as either a misdemeanor or felony. A prosecutor or judge will usually make this determination.

The definition is as follows: “any willful and unlawful use of force or violence upon another person.”

Assault with a Deadly Weapon

Assault with a deadly weapon not involving a firearm is a felony.

This type of assault is defined as an assault in which a person uses any “deadly weapon” other than a firearm in a manner likely to produce great bodily harm. You should note that “deadly weapon” is not defined in the code section and is interpreted very broadly. This might include a bat, tire iron, knife or car. A conviction for assault with a deadly weapon could result in up to $10,000 in fines and 4 months in prison. California Penal Code Section 240-241

Assault with a Firearm

What this means is that simply having a firearm or gun on you or in your possession during any assault is sufficient to bring a felony charge of assault with a firearm.

A conviction of assault with a firearm may result in up to $10,000 in fines and 4 months in prison. California Penal Code Section 244

Penalties can be increased if certain enhancements, exceptions, and aggravating factors can be proven. Factors include the location of the incident (school, hospital or prison) and who the act was committed against. You will see increased penalties if an assault is committed against a police officer, public safety officer or firefighter, teacher, prison guard, government official, highway worker, bus driver, cab driver or transit operator. Other special cases and enhancements also apply.

In most criminal cases, a sentence includes victim restitution. What this means is that the criminal judge will order the defendant to pay for the victims medical bills and other out-of-pocket expenses.

Generally speaking, a civil assault is a demonstration of an unlawful intent by one person to inflict immediate injury on the person of another then present. A civil action for assault is based upon an invasion of the right of a person to live without being put in fear of personal harm.” (Lowry v. Standard Oil Co. of California (1944) 63 Cal.App.2d 1, 6—7 [146 P.2d 57], internal citation omitted.)

A civil battery is any intentional, unlawful and harmful contact by one person with the person of another… A harmful contact, intentionally done is the essence of a battery. A contact is ‘unlawful’ if it is unconsented to.” (Ashcraft v. King (1991) 228 Cal.App.3d 604, 611 [278 Cal.Rptr. 900], internal citations omitted.)

Damages in a Civil Assault and Battery Case

You are entitled to be reasonably compensated for all injuries and damages relating to a civil assault and battery case. This includes payment of all past and future medical bills, loss of earnings and out-of-pocket expenses.

You are also entitled to past and future general damages for all pain and suffering associated with the injury. Wrongful death damages for surviving heirs are also available for civil assault and battery cases resulting in death.