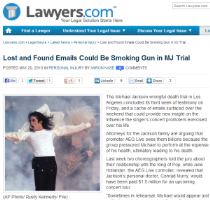 The Michael Jackson wrongful death case is set to start trial in April in Los Angeles, California. Recently Lawyers.com contacted Mitch for his commentary about the upcoming trial…

“This is an interesting wrongful death case. It appears to me that Jackson’s mother is interested in trying to show that in addition to hiring a reckless doctor, AEG Live should also be held liable for allegedly acting in an careless fashion with her son’s life.

Although I have not personally reviewed the documents, news agencies are reporting that less than two weeks before Jackson’s death, AEG Live co-CEO Paul Gongaware wrote an e-mail suggesting the company wanted to use Murray’s $150,000 monthly salary to persuade the doctor to do exactly what they wanted him to do.

Furthermore, Murray is reported as saying that an AEG Live representative told him AEG Live owned “the toilet paper he wipes his *** with” and “the f**kin’ popsicles that his children are sucking on” and “if he doesn’t get the show done he’s over.”

Taking all of this in to consideration, I believe more facts will be necessary to link AEG Live to civil liability and damages relating to Murray’s actions and Jackson’s death. This new information certainly doesn’t help AEG Live’s defense and even the trial judge has ruled that there is a triable issue of material fact that should allow the wrongful death case to go before a jury in April.

I know the plaintiffs’ lawyers and they are very, very good. If I was a betting man, I’d put my money on Brian Panish and his experienced team of lawyers.”

To read the full interview on Lawyers.com, click here…