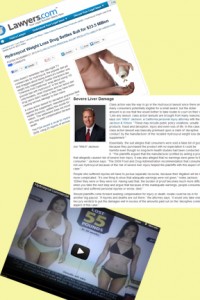 Who doesn’t remember the late-night TV commercials for Hydroxycut, the popular diet pill that bragged about being America’s number one weight loss supplement? Svelte characters like “Charlene from California” brag about losing “55 pounds fast with Hydroxycut” in the spots. Unfortunately, what Charlene and her fellow diet drug users didn’t realize is they may have been causing serious damage to their livers… [click here to read more…]

Mitch was recently interviewed by Lawyers.com to share his thoughts on this recent class action settlement. We invite you to read the entire article.

“Like any lawsuit, class action lawsuits are brought from many reasons… These may include public policy violations, unsafe products, fraud and deception, injury and even loss of life. In this case, the class action lawsuit was basically premised upon a claim of ‘deceptive conduct’ by the manufacturer of the recalled Hydroxycut weight loss diet supplement.”

“Essentially, the suit alleges that consumers were sold a false bill of goods, because they purchased the product with no expectation it could be harmful even though no long-term health studies had been conducted on it.”

“The plaintiffs argued that the manufacturer profited by selling a product that allegedly caused risk of severe liver injury. It was also alleged that no warnings were given to the consumer,” Jackson says. “The 2009 Food and Drug Administration recommendation that consumers not use Hydroxycut because of the risk of severe liver injury helped the plaintiffs with this aspect of the case.”

So what do you think? Should Hydroxycut be exposed to liability if it causes harm to people? Should it include the possibility of liver damage on its warning labels?

Click here to read the entire article at Lawyers.com