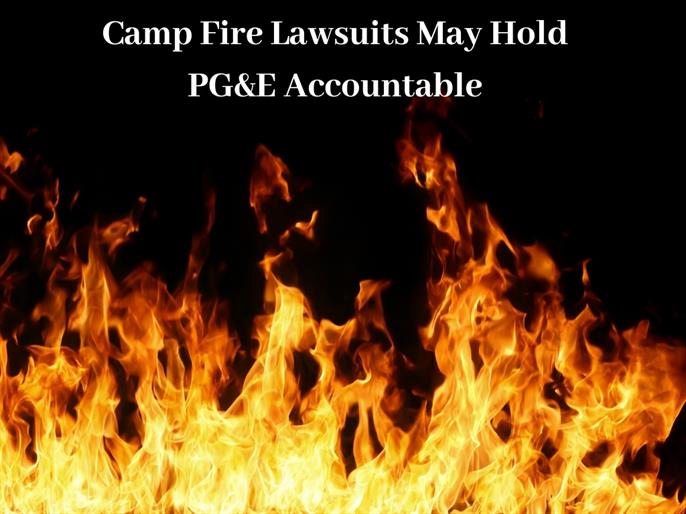 Even though fire investigators are still investigating the cause of the Paradise Camp Fire, which was the deadliest in California’s history, many families have already filed lawsuits against Pacific Gas & Electric Co (“PG&E”).

The Camp Fire swept across Butte County, CA, burning almost 14,000 homes, and 117,000 acres, within a few days. Over 150,000 people have been displaced from their homes. The city of Paradise, where 80-90% of homes have been destroyed, was hardest hit. The current death toll stands at 88 (as of Nov. 29, 2018), although hundreds more are still missing. Fire investigators are still actively searching for human remains. And there are several tragic burn cases, meaning people who are undergoing extensive burn treatment as a result of injuries caused by these fires.

Why Should Families Affected By The Camp Fire File Lawsuits Right Now?

People now displaced due to the Camp Fire, in many cases, are sleeping in random places like Wal-Mart parking lots, hotel rooms, and campgrounds. Most of these families have lost all of their life possessions. Other families have lost loved ones, so have been overcome with grief. These families desperately need financial assistance as soon as possible.

Lawsuits could take years -- or be resolved more quickly through settlement processes. Either way, the sooner the lawyers start working on these cases, the more quickly families may get financial relief.

There is believed to be approximately $1.4 billion in PG&E insurance coverage, but risk consultants estimate Camp Fire property damages of up to $10 billion. That’s money families may have to divide -- and will need to cover rebuilding structures, as well as financial recovery for personal injury and wrongful death victims, such as medical care, and pain and suffering.

Why Would Families File Lawsuits Before Fire Investigators Determine The Cause Of The Paradise Camp Fire?

Although the findings of the Camp Fire investigators may be relevant to the outcome of any lawsuit, lawyers for the victims of families will conduct their own investigations. Sometimes, as dedicated victim advocates, lawyers dig much deeper into relevant evidence that could better help families prove PG & E negligence.

Lawyers for victims can try to prove that PG & E’s negligent behavior caused the Paradise Camp Fire, using many different litigation tools. For example, victim’s lawyers will study any relevant company documents or announcements, searching to find, and talking to, witnesses, reviewing the fire investigator findings and reports, as well as looking at the history of other complaints, fires, service records, age of equipment, maintenance records, and many other types of evidence.

Since the victim’s lawyers are actually advocates for the families (not just neutral investigators), they may more aggressively search for evidence that specifically supports the families’ claims. Additionally, fire investigators are not legal experts, so they are not in the best position to determine legal cause. That’s the job of lawyers, to try to prove, and juries, to decide, after reviewing relevant evidence produced by lawyers for both sides.

What Do The Camp Fire Lawsuits Allege PG&E Did Wrong?

In some of the early lawsuits filed by Camp Fire victims, the lawyers have alleged that PG&E caused the fire, based on these facts:

You can read one of the complaints filed in court, which provides detailed factual allegations, here.

Shockingly, one allegation was:

“A 2014 audit of PG&E’s North Valley Division revealed that between 2009 and 2014 there were over 3,400 PG&E repair and maintenance requests in the area of the Camp Fire that were completed past the date of scheduled action.”

This is a company that makes money to perform repairs in a timely manner. They can either spend that money on doing their job properly, or skimp, and put more money in the pockets of their shareholders, in the form of profits.

One of the filed lawsuits alleges that, to minimize fire risk, PG&E should have:

Hopefully the courts will help these devastated families start putting their lives back together as quickly as possible.