Orange County Dog Bites and Dog Attacks- Have You Been Bitten By a Vicious Dog?

Most people are not aware of the fact that each year across Orange County and the United States, close to 5,000,000 people are bitten or attacked by dogs. Of these dog bite victims, about 340,000 require emergency treatment and result in more than 1,000dog bite hospital emergency room visits each day. Tragically, about 20 of these dog attacks result in loss of human life.

Most dog bite victims are children who are bitten or attacked in their face and hands. Because you never know what the disposition of a dog is, it’s usually best to first talk to a dog owner before ever approaching and petting a dog. Children should be taught to approach dogs slowly and to allow the dog to get comfortable with him or her before trying to pet the animal.

When you really think about all of the unknowns, it’s probably best to avoid strange dogs altogether. The fact of the matter is that because we’ve handled so many disfiguring and life changing dog bite cases over the years, we think it’s smart to simply avoid putting yourself or child in a location or position that might result in a dog bite or attack. Dogs are animals and you just never know what they are going to do.

According to Orange County Animal Care (OCAC), a dog can be determined to be dangerous or vicious if it behaves in any of the follow three ways:

First, if unprovoked, it engages in any behavior that requires a person to take defensive action to avoid bodily injury. The behavior must happen on two separate occasions with the prior 36-month period and it doesn’t matter if the behavior happens on or off the dog owner’s property.

Second, if the dog bites a person while unprovoked and causes an injury less severe than a “severe injury”.

Third, if the dog, when unprovoked, kills or seriously injures a domestic animal, horse or livestock.

(2) Any dog, which unprovoked and in an aggressive manner, causes severe injury or death to a human being. Again, it doesn’t matter if the behavior happens on or off the owner’s property;

Keep in mind that there are certain common sense exceptions to the above guidelines and rules. For example, if someone is trespassing on to your property or breaking in to your house and your dog attacks, then your dog would not be deemed to have acted as a dangerous or vicious dog. 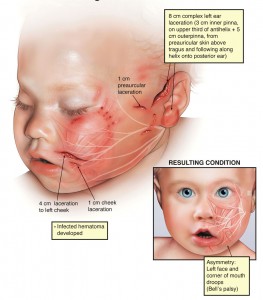 In most California dog bite cases, a victim does not need to show that the dog owner was negligent or careless. In fact, pursuant to California Civil Code §3342, the owner of a dog is “strictly liable” for all dog bite related injuries and harm. Other California codes and court cases expand liability to include being knocked down by a dog while standing, walking or even riding a bike.

Over the years, we’ve represented dog bite victims who have been bitten in their faces, hands, chest and ankles. We helped clients who have lost fingers, parts of their hand, toes and even an ear to dog attacks. The above is a trial exhibit of a 15 month old boy who was bitten in the face by a neighbor’s dog. After being attached, his mother reached down to pull the dog off of her son. The dog turned, grabbed the mother by the throat, and also took her to the ground.

We were able to successfully help these clients and to this day, still stay in touch. We’d like to think that we’ve done a good job for our dog bite clients. Hopefully, their testimonials and posted case results speak for themselves.

When handling serious dog bite cases, there’s a right and wrong way to right the wrong, fix the harm, and maximize the results. Call us and we’ll be happy to take the time to explain the difference. We’ve been helping Orange County dog bite victims since 1986 and chances are, we can help you too.