Police Misconduct or Justifiable Use of Force? 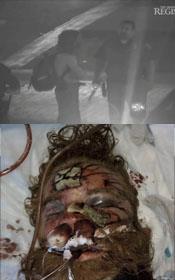 The Orange County, California, “Kelly Thomas” case involves several police officers being charged with crimes for allegedly assaulting and killing Kelly Thomas. The key question being looked at this week during the preliminary hearing is whether or not the officers were justified in their conduct and whether or not there is sufficient evidence to prosecute the officers in the criminal case. [Update 01-13-14: Ex-cops acquitted in beating death of homeless man in California]

Below is the unedited video of the incident. You decide.

According to the Orange County Register Newspaper (good link of Kelly Thomas resources/updates…), the videotape, shown in public for the first time during the preliminary hearing Monday, showed an escalating situation that abruptly became violent when Ramos (police officer) put on rubber gloves and said, “Now, you see my fists? … They’re getting ready to f— you up … if you don’t start f—– listening.”

Within moments, Ramos and another officer strike Thomas with a baton before taking him to the ground, according to the video, and land on him as he begins screaming “I’m sorry dude! … I’m sorry! … I can’t breathe, dude … I can’t breathe, sir! Please, help!” and later “Help, Dad! Dad! Help me, Dad!”