Trial Lawyer Tips- How to Use Paradigm and Perception to Win Your Next Case!

Molding proper jury perception is key to winning cases. Assuming you do everything else correct, what you tell and show your jury in the first couple of minutes of voir dire and opening statement can make or break the outcome your case.

This concept also applies to how you introduce an issue, fact or piece of evidence to the jury for the very first time. Here’s what I mean.

There’s a concept most of us are aware of called paradigm. For purposes of this article, I’m talking about a paradigm about how we all see, understand, and interpret the world. What most of us would consider our own unique perception of things based upon what we’ve been taught or what we’ve experienced in life.

Whether you realize it or not, we all see the world differently. We all see things as we are conditioned to see them and not necessarily as they may truly be. This applies to what each and every juror sitting on your panel thinks and believes.

We All Have Maps

Now think about this for a moment. The fact of the matter is that you’ve got an accurate map and you’re doing your best to try and find the courthouse. You’re smart, focused, and determined. But it doesn’t matter. Regardless of your good faith or effort, your incorrect map will prohibit you from finding the right courthouse absent other factors.

Most of us have many preexisting maps in our minds about different facts, issues or things. So do your jurors. If they have the wrong maps in their heads, no matter how accurate the maps may be or how smart or determined they are, the odds are that they will never end up at the correct destination without your help.

This is why in trial you need to make sure each and every juror has the right map in their head for each major fact, issue or piece of evidence. By doing so, they’ll be able to use that map to easily locate the destination you are asking them to find.

You see, most people form and have a perception about something based upon what they are initially shown or told. Sometimes it takes a lifetime of experiences, good or bad, to form the perception. In other instances, it can only take seconds.

A Picture (or three) is Worth a Thousand Words

Take about 30 seconds and closely look at the following picture (picture #1). What do you see? Most people see a beautiful young woman with a hat, necklace and looking away. 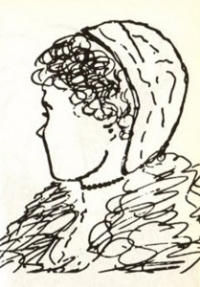 Next, take a look at picture #2. What do you see? More than 90% of the people who look at this second picture (after seeing picture #1) also see the same young woman with additional portions of her picture colored or shaded in.

Now here’s an interesting twist. Scroll down to the bottom of this article and take a look at picture #3. Study it carefully. Look at it for at least 10-20 seconds. What do you see?

When these people (who are never shown picture #1) are next shown picture #2, they see the same old woman with her picture now simply colored or shaded. The necklace in picture #2 is now the old lady’s mouth.

The students were then shown picture #2 on a big screen in front of the class. The two groups were asked to describe to each other what they observed in picture #2.

The students who were shown picture #1 described a beautiful young woman with a necklace looking away. Someone they might like to ask out on a date.

The fact of the matter is that both groups of students were shown the same picture (picture #2) at the front of their classroom. The undisputed facts were that they all were looking at the same lines and shades of colors– the same objective facts– as the other. However, each group was looking at the exact same group of lines and curves (the same piece of evidence) through different lenses and from different paradigms or perspectives.

They each interpreted the identical undisputed facts (or piece of evidence) completely different based upon what they were preconditioned to see. Each group sincerely believed in their own interpretation of photograph #2. Each group believe they were right and the other group was wrong. They disagreed. They were divided.

This is what happens with jurors evaluating different pieces of evidence. At the beginning of the trial, they each bring their own paradigms and perspectives. They continue to do so each day thereafter. If their maps, no matter how accurate, are not designed to help get the outcome you are looking for, your time and efforts will be wasted at trial.

Understanding the paradigm of perception is critical to your success as a trial lawyer. What you say and do to ethically precondition the perception of your jurors to look at common, objective evidence– facts not in dispute– can make or break your case. Do this correctly and in most cases, whatever twist opposing counsel tries to give to picture #2 will be met with doubt and disbelief. Your jurors will see picture #2 exactly like you have conditioned them to see it based upon picture #1.

Telling your jury what the fact, issue or evidence is and then showing them what you just told them is instrumental to using the paradigm of perception in your favor. Knowing about this concept and doing this before opposing counsel has a chance to do so is critical to your success. Most, if not all, of them will see the objective piece of evidence through the initial lens you were kind enough (and smart enough) to make sure they had.

So what do you do if you’re not the first one up? What do you do if opposing counsel has the first shot with the jury on a particular fact or issue and he or she understands this concept and even more important, puts it to use?

What you do is use the ‘aha’ approach to educate your jury about what the true and accurate facts are and how they should perceive the issues.

Explain to your jury that many of us see things through different lenses. We see what our mind wants us to see based upon some kind of experience, belief or foundation, good or bad.

Ask them to completely wipe from their mind the proposition of fact or interpretation of issue that opposing counsel has just shared with them (we’ll continue to use our photos as an example but remember this applies to almost any type of fact, issue or piece of evidence). Remember, they haven’t yet seen photograph #3 so most will probably not know what’s coming next.

Show them photograph #3 (again, simply a metaphor for whatever fact or issue you’re going to talk about). Spend as much time as you need to explain what they are looking at or the issue they are asked to consider. Make sure they all see the fact or issue clearly. “Does everyone clearly see this item?” Do you clearly see what this issue is?”

Next, go back to picture #2 (or the particular fact or issue at hand) and discuss this piece of evidence in detail. Ask the jurors to see the item or review the fact through a new lens and from a new perspective. Talk about what they see. A second perspective normally takes a bit more work but eventually, most will see picture #2 from the new perspective– your perspective.

Do this correctly and this ‘aha’ moment not only helps you sell your fact or issue to a jury, but it will also give you increased credibility. Through a respectful and calm process, you were able to remove the mirrors and pull up the shades and give new light to the fact or issue. Use the right approach and it can make opposing counsel appear to have deceived the jury for not originally sharing picture #3 with them in the first place.

Come back to this issue at the end of your case. Remind your jury of the above during your closing argument. Remind the jury what was discussed during voir dire and opening concerning these issues (picture #1, #2 and #3). Regardless of whether you get the first or second bite of the perception apple, good things can happen if this powerful technique is used correctly.